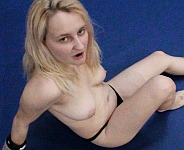 A tickle wrestling custom where Nicole Oring pins and tickles Masked Mauler until he can take no more!

Masked Mauler wants to settle the score with Nicole Oring, and he’ll cheap shot her to do it! A pissed off Nicole is nothing to take lightly, and Mauler finds himself regretting the sucker punch. But will Nicole stay on top, or is she in for a long, punishing match?

See this and more on Clips4Sale Store, or BUY THIS CLIP NOW for $14.99. – - Preview Clip / Full Description

Victoria and the Masked Mauler clash on the mats and fight to see who is the best. Victoria is even stronger than she looks, constantly overpowering the Mauler and fighting her way out of his holds. Victoria is hungry for the win, and shows the Mauler no mercy!

See this and more on Clips4Sale Store, or BUY THIS CLIP NOW for $9.99. – - Preview Clip / Full Description

Hot new female fighter Erika makes her debut at Hit the Mat! How will she handle the Mexicutioner?
Erika is a strong scrapper who has always loved beating up boys. See how she fares in the HTM ring!
See it on our Clips4Sale Store, or BUY NOW for $14.99. – - Preview Clip / Full Description

Masked Mauler becomes Devon Michaels' training dummy in this mixed wrestling video, where a few minutes in, Devon Michaels ends up with her breasts exposed! See it on our Clips4Sale Store, or BUY NOW ($22.99)

The Masked Mauler returns! Hollywood has heard the Masked Mauler likes hardcore mixed wrestling matches, and challenges him to one on the mats. Hollywood looks stunning in her gold bikini, and her wrestling skills give her an early advantage over the masked male, but before long this match goes back and forth, and one wrestler is left on the ground in pain!

Nicole walks into the HTM studios ready for a hardcore match with the Masked Mauler. She mocks her opponent and quickly takes control of the match. Nicole thinks she has the fight won until she gets a taste of what the hardcore match is all about. The Masked Mauler gives as good as he gets!

The mysterious Masked Mauler hails from the mean streets of Ciudad Juárez,  Mexico.