Hit the Mat Boxing and Wrestling - About the Company 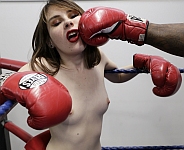 Hit The Mat has been doing sports entertainment videos since around 2003. The Hit the Mat! Yahoo Group (RIP) opened in 2004, accepting customs and posting wrestling content. We opened our first fetish fighting clips4sale store back in 2007, focused on mixed wrestling and female wrestling. It wasn’t very long until Hit the Mat began producing mixed boxing and female boxing customs, which became incredibly popular, particularly the mixed boxing epics that showed the man (Darrius) dominating, which was a major rarity among mixed boxing videos at the time.

Darrius and Duncan had been working together for various companies for years and began shooting videos for their own “Hit the Mat!” company around 2003. The Duncan/Darrius vs Cassie mixed oil wrestling videos were actually shot at the site which would become the famous STJ ring, before it had even been put up! Hit the Mat’s production really ramped up around 2007, with the opening of the Hit the Mat C4S store. Hit the Mat shot in karate studio mat rooms, other companies rings, and the apartment/mat room scenes in the late 2000s were shot in Duncan’s own house. In late 2011, Hit the Mat finally had it’s own studio in Canoga Park. In early 2017, Hit the Mat moved to an even bigger studio in Van Nuys.

Hit the Mat has worked with some of the biggest names in the business as well as up and coming talent. Catfighters, mixed wrestlers and boxers from all over. Jennifer Thomas, Nicole Oring, Sybil Starr, Cali Logan, Onyx, Hollywood, Santana, Francesca Le, Christie Ricci, Paris Kennedy, Kymberly Jane and Goldie Blair are just a few of the legends we have done videos with (in no particular order!). We are located in the Los Angeles area of California, USA. If you are in town and think you have what it takes to Hit the Mat then contact us today!

At Hit the Mat we also have a wrestling ring available for session wrestling, boxing, photo shoots and video shoots! Contact us for rates if you are looking for a 100% private, INDOOR ring. Pictures of the ring can be found here.