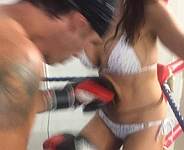 This match has been a long time coming, as Raquel is fired up to face Darrius in the boxing ring. She thinks she has the dynamite to knock him down and out. Darrius just sees her as another chick in his way that has, “No Chance!”

It seems that Darrius’ reputation in the mixed boxing arena has gone international as Mutiny from Canada graces the HTM studios looking to knock Darrius out cold. In a pre fight interview she doesn’t think Darrius can do anything to her, while Darrius, cocky as always doubts her boxing abilities

This is the rematch that people have been waiting for, the match that started it all. Former lovers Frankie and Darrius meet once more in the boxing ring. Frankie has been looking forward to this for a long time. Darrius is cocky knowing what he did to her last time she faced him, and positive he will send her to the canvas once again.

Cali Logan is bouncing in her corner wearing her blue gloves. The ref explains that this is a special rules boxing match. Ten rounds, each round is ended by a knockout, the winner is whoever has the most knockouts at the end of ten rounds. What follows is a complete mixed boxing squash match!

Not satisfied with the results from their last mixed boxing match, Christie Ricci and Darrius glove up again for another mixed fight! Will the outcome be different this time around?? This is a tough fight with many head snapping punches and back and forth action!

Christie is shadowboxing expecting to meet her opponent, when Darrius walks in asking what she is doing. Quickly they challenge each other to a boxing match and the fight is on after a sneak attack from Christie. These are two tough fighters and this is one intense mixed boxing match!