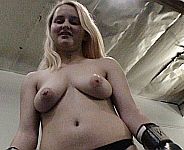 Dez Desire is looking for an immediate rematch and some payback. While she’s still shaking off the cobwebs from her previous defeat, Dez Desire turns things around and short order. Now it’s time for YOU to take a beating! Desi’s striking skills are on display, with quick, sharp punches and combinations. She has some fierce punches in contrast to her sweet and bubbly personality! Dez also isn’t above a few low blows, including “speedbagging” you in the balls (speedballing?) while you’re down! Prepare to get punched out by Dez Desire!