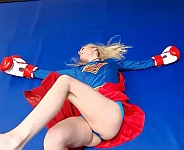 Goldie Blair and Kymberly Jane are back in the ring again. This time with the gloves on, and tops off! A fantasy topless foxy boxing match between two beautiful babes. The girls bounce around the ring, battering each others faces, bellies and breasts. Kym starts out overconfident, but Goldie knocks her down a few pegs pretty quickly, and it becomes a topless boxing BRAWL!