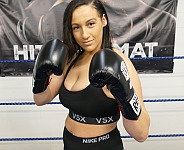 
Newest fighting videos from Hit the Mat! Here you will find our archive of boxing and wrestling posts. Or contact us to order your very own custom match!
Sort by: Date (NEW-default) - Date (OLD) - Title (ASC) - Title (DESC) - Random - Grid View

Santana and Duncan fight for HTM's Oil Wrestling Championship belt. Duncan threatens to put Santana into permanent retirement, and Santana is looking forward to showing him what she can do. We have Duncan, complaining that he should just be given the belt, because his challenger, Santana, is no match for him. Santana, oiling up in the other corner, tells how she is going to make him crawl out of the ring like a bitch.

Mutiny is working on her stomach muscles, when Raquel walks into the room. Raquel challenges Mutiny to a belly punching challenge to see who has the stronger abs. Mutiny quickly agrees and they start. Three rounds of hot girl on girl belly punching action, who’s tougher??

Santa is interviewing a new helper for the Christmas season. Santa remarks that she is late, and Jo is not going to be Santa’s new assistant, she is going to be his new ho. Jo doesn’t take to kindly to that and throws Santa on the ground to teach him a holiday lesson he will not soon forget, or is she the one who gets a Holiday full of pain.

Jade challenges Frankie to a submissions match. Both girls give a prefight interview talking about the pain they plan on inflicting on each other. This brutal catfight goes on for ages with one girl being completely dominated!

Former Americas Next Top Model contestant turn wrestler, Nina is stretching out in the ring, getting ready for her wrestling training. Onyx (dressed in black) shows up, pissed off that someone is in her ring, and looking to take it out on the newcomer. They agree to fight in a two out of three fall match, pro-wrestling style!

Welcome to the School of Hard Knocks! Hollywood faces off against the professor when she lands herself in detention for not doing her homework, and the only way to get out is through the professor in the ring!